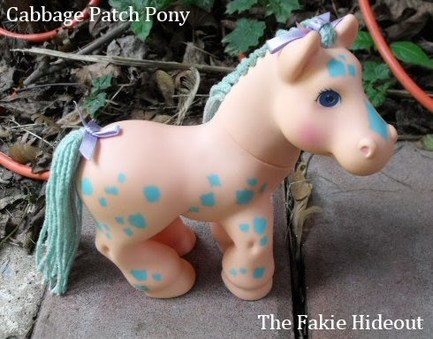 Technically, these ponies aren't really fakies because they were produced by Hasbro, the company that also made My Little Ponies. Still, many MLP collectors consider them fakies for several reasons: one, they came out after MLP were introduced, and two, they are clearly inspired by MLP. My Little Pony was the first line of horse toys for little girls that gave the horses what we call "cutie marks," i.e. the symbols that cover their flanks or sometimes their whole bodies. This became the way in which little girls could identify their ponies. The Cabbage Patch ponies often share this characteristic, as well as others, like the soft PVC bodies, comb-able hair, and so on.

Some have thick yarn for hair while others have synthetic hair like real MLP. There are standard size Cabbage Patch ponies as well as jumbo ones. The jumbo ones typically looked a bit more realistic, meaning their symbols were more like fur patterns, i.e. pinto or palomino or so on.

These ponies have firm, sturdy bodies, almost firmer than MLP, and are good quality. They are labelled around their undersides, near the butt. It should read:

Sometimes they also have a serial number after that. They appeared in Cabbage Patch Kid videos and were also made in plush form as well. But... Beware, as you will see, there are fakies that have been made using Cabbage Patch Pony molds. 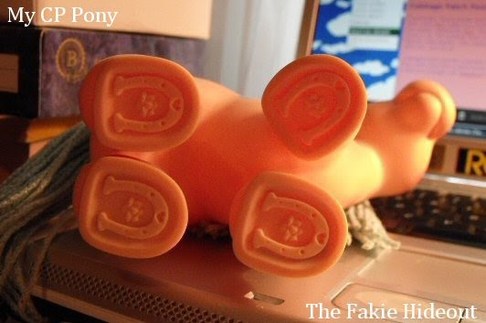 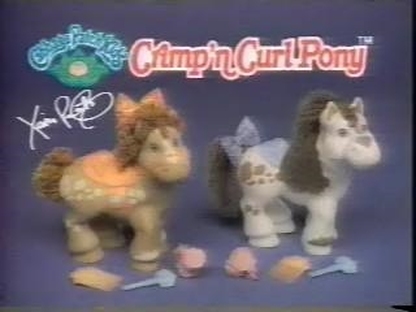 Screenshot from a Cabbage Patch Pony commercial, found on RetroJunk.com.