Alright, so you've made it this far. You're curious about MLP fakies, but maybe you're not so sure about all the hubbub. Let's go through some commonly asked questions.

What the heck is a fakie?! "Fakie" is a term that MLP collectors use to refer to My Little Pony knock-offs. This is sometimes hard to narrowly define. Every collector has their own opinion as to what's a fakie and what's not. A good rule of thumb to remember is that a fakie is a pony toy that is not manufactured by Hasbro but is clearly inspired by or reminiscent of the Hasbro designs. What I mean by this is, you couldn't call Breyer horses fakies. Yes, their horses and they are toys, but they do not "rip" off any of Hasbro MLP's characteristics, like non-realistic body and hair colors, cutie marks (the symbols or designs that appear on a pony's flank or body), brushable hair, and a chubbier body. However this also gets blurry as the different incarnations of the Hasbro MLP line differ in appearance. As said, this is different for every collector. I might consider Fashion Star Fillies to be inspired by the MLP line while someone else might consider them completely separate.

Okay, so why collect them? Well, some MLP collectors in the community find fakies positively revolting. And, they do have a point. Many fakies are cheaply made, and can range from looking identical to real MLP to completely alien and foreign to what we collectors are used to. They don't always come in the best of color combinations, either. They always seem to weasel their way into MLP lots on eBay. However, despite these things, many in the community love them. I am on of those people! I find many fakies to have their own charm and personality. A lot of them are actually cute, rather than ugly. I like them all - cute or ugly, because there's something odd about them. Also, they are a lot cheaper and sometimes more plentiful than genuine MLP. But, I'll warn you now, they are just as addicting as MLPs! Beware!

Where can I buy fakies? Fakies have been made since My Little Pony first began way back in the early 1980s. So, this means that vintage and older fakies, as well as newer but second hand fakies, can be found at yard sales, thrift stores, swap meets, and online auction or sale sites like eBay, just like one would find real ponies. But, they are also fairly prevalent new in retail stores. If you live in the US, you will want to try browsing stores like Wal-mart, K-Mart, Dollar General (I work there and it always has fakies), Dollar Tree, Family Dollar, and Walgreens. Any store that sells novelty toys is likely to sell fakies. It can be easier to find fakies around the winter holidays, as stores stock an extra variety of toys, cheap and expensive, for holiday shoppers.

Are any of them valuable? Right now there is a bit of a buzz going on about fakies. More and more collectors are getting into them these days, which raises the going rate of fakies. However, most fakies will only bring in about $1 to $5 at most. There are exceptions, however. Some fakies are rarer or more popular, which raises the value as they will be much harder to find. Totsy's, Takara babies, and Princess Rinse'n'spits are in much higher demand, so these have been feching a bit more dough, however, the pony market fluctuates a great deal based on interest. Even though a fakie may be rare, if it's just not very popular at the moment, you won't fetch much for her. See the Fakie Guide pages for more details on this.

Also, we often describe fakies in relation to real My Little Ponies. One might call a fakie a "G1 mold fakie," which would mean that fakie has been made in an identical or similar mold/pose as a real MLP. Knowing the ins and outs of MLP collecting will help you in collecting fakies. Some fakies look absolutely nothing like any of the MLP generations.

Fakie: A toy made to look like a My Little Pony not manufactured by Hasbro.

Hasbro: The company who make My Little Pony toys.

MLP: The abbreviation for My Little Pony

G1: The first line of My Little Ponies, which was started in the 1980s.

G3: The third line of My Little Ponies, still being produced now.

G3.5: What some people call the newest design for MLP. These are smaller, and more "chibi" like.


G4: The newest generation of MLP, known for the cartoon My Little Pony: Friendship is Magic. 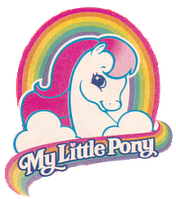