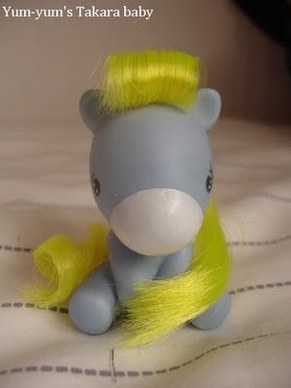 Photo donated by Yum-Yum. Her Takara babies are gorgeous!
These fakies are the source of much discussion among MLP collectors. During the G1 MLP days, a line of My Little Pony toys were introduced in Japan under the guise of Japanese toy company, Takara. These were called "Osharena Ponies." Below are some screen shots of Takara MLP commercials.
Very little is known about these ponies. Only a handful (and I really mean that) of collectors are known to own a Takara pony. It has been said that in Japanese culture, it's not as necessary to hang on to material objects, so many of these ponies were likely disposed of over the years. We know from Takara pony pamphlets that there were at least plans to make baby ponies in the same fashion, but no collectors in the MLP community have come forward with a genuine Takara baby.

Perhaps the babies in the photos were just prototypes. But, clearly, die castings were made for these ponies, as we have fakies of the baby ponies. (Those had to come from somewhere. Perhaps, because these girls were never actually put in to production --we think-- the Takara company threw away the diecasts, and some tricky rival toy company found them and used them. 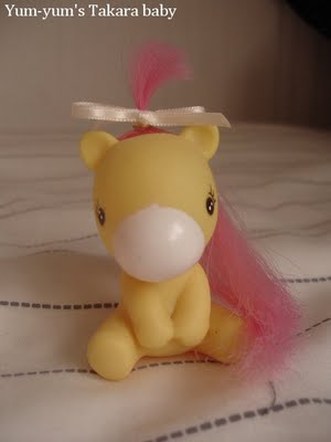 Another of Yum-Yum's gorgeous babies!
These fakies appear to have been produced by at least more than one company, as they vary in appearance and quality. Some have full manes while others will only have one small lock of hair on the back of their heads. Some have the white muzzles painted on like real Takara ponies, while others do not. The real adult Takara's had movable "arms and legs," but these do not. They have been made in a seated pose, although some have differently placed "arms." They have little thumbs as well, as the Takara Line has made MLP more anthropomorphized, or more human-like.

These have been turning up fairly often in the Netherlands and Scandinavia. However, MIP photos have turned up, showing them packaged with fake Remcos, with English writing on the packages, saying "Lovely Pets." As of now, I am not sure what companies produced these fakies or exactly when, but the MIP Lovely Pets set appeared to be older, probably 1980s.


I am not sure as to exactly how rare these are, but the demand among collectors are high as these are currently very desirable. That makes them more expensive and harder to come by. Those willing to part with these fakies are selling them for around $30 to $40. I would say these are the most valuable of all fakies.