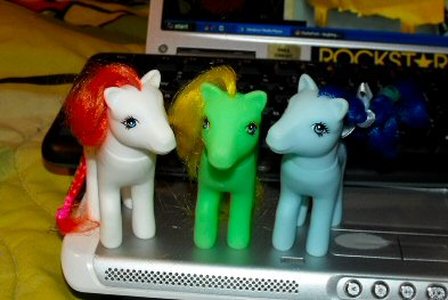 These have Sweetheart Sister heads with what almost looks like a flutter pony body. They usually have concave hooves as well. These were apparently intended to be babies, but they have a disproportionate head to body ratio. I beleive these are being manufactured and sold by various companies. They don't have any company or brand markings. The feet are marked, one word per foot, "MADE IN CHINA 1". Not sure what the "1" means.

I purchased  "Pony Family" set from KB Toys several years ago that had a random assortment of fakies, and there were about two Lady Babies. So, we know that they are still being produced today. Not altogether sure if these were being made in the 80's as well, but I'd say probably.

These girls have the same symbols as the fruit babies, who they are usually sold with.